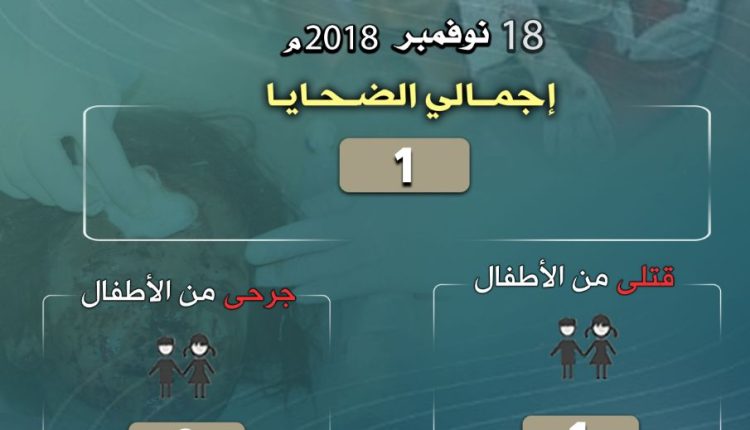 A child was seriously injured in an explosion of a landmine remnant of the US-Saudi aggression in Al-Hawk district, Hodeidah governorate, Almasirah Net correspondent reported.

On Sunday, 12 citizens, including six children, were seriously injured, as a result of the explosion of landmines in Al-Jah area, in the same Governorate.

These tragedies come in light of international silence about the crime of the US-Saudi aggression by preventing the entry of mine detectors, which represents an obstruction of humanitarian work, and deliberate harm to the largest number of Yemenis.

Earlier, the Executive Center for Mine Action revealed numbers on the victims hit by US-Saudi remnant bombs and mines during October.

In a statement, the center said that the number of victims during last October reached 18 martyrs and 28 injured. All were due to mines, cluster bombs and remnants of the US-Saudi aggression. Since the beginning of this year, the center reported the death of 219 citizens and the injury of 424 others.

The statement added that the center did not receive any response from the United Nations Development Program regarding the mine detectors, explaining that the continued denial of entry of the mine detectors by the aggression represents an obstruction to humanitarian work and deliberately harming the largest number of Yemenis.

He pointed out that Security Council Resolution (2643) specified the mission of the Hodeidah Agreement mission to supervise the removal of mines and cluster bombs within the Hodeidah governorate, revealing the failure of the UN mission, which has not yet issued a statement explaining that the aggression prevents the entry of mine detectors, although it is obligated to reveal that Pursuant to a Security Council resolution.

The center indicated that as a result of cluster bombs and remnants of the aggression the total number of casualties amounted to 395 people, including 134 killed in the governorates of Hodeidah, Sana’a, Al-Jawf, Marib, Al-Bayda, Hajjah, Taiz.