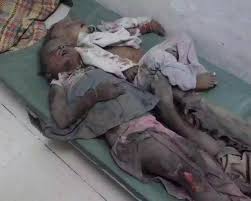 At exactly  five o’clock in the afternoon on Monday, July 6, 2015 AD, the warplanes of the Coalition of Aggression took place There was an attack on markets in the Al-Jaw area of ​​the Ayal district, Yazid, in the governorate of Amran, where it was targeted.

The first raids were in the Al Noom market, and as a result (14) civilians were killed, who slept in the market, including five Children were injured, and seven others, including two children, were injured, and the market was destroyed in full hope, with all that means weakening Damage to a mosque attached to Al-Su’ouq. Asma’ (Al-Saqayyeh Mosque), Al-Ma’anah, to destroy Al-Admar with (10) isolates and four quarries A commercial bus and a burning bus on the highway to transport citizens who had burns, including a child.

‘No roof, no seats, no desks’: photographing Yemen’s conflict-hit schools

Entesaf Organization: On International Women’s Day, United Nations Is A…

Insaf organization monitors more than 13,000 dead and wounded since the start of the…

Legal and Humanitarian Considerations of Targeting Civilians, Children and Civilian…