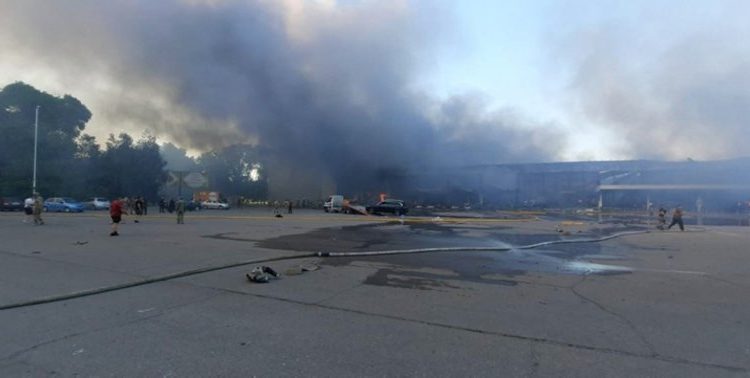 A Russian missile strike killed at least 10 people and wounded more than 40 others at a mall in Ukraine on Monday, a regional governor said, warning that the toll could rise.

“Ten dead and more than 40 people have been injured. This is currently the situation in Kremenchuk as a result of the missile strike,” said Dmytro Lunin, head of the administration of Poltava.

Ukrainian President Volodymyr Zelensky said “over a thousand civilians” were in the mall when the missiles struck the city, which had a pre-war population of 220,000 people.

“The mall is on fire, rescuers are fighting the fire. The number of victims is impossible to imagine,” Zelensky wrote on Facebook.

A video shared by Zelensky showed the mall engulfed in flames with dozens of rescuers and a fire truck outside.

Emergency services also published images showing the smouldering remains of the building, with firefighters and rescuers trying to clear the debris.

The Ukrainian defence ministry said the strike was deliberately timed to coincide with the mall’s busiest hours and cause the maximum number of victims.

The Ukrainian air force said the mall was hit by Kh-22 anti-ship missiles fired from Tu-22 bombers from the region of Kursk in western Russia.

“The missile fire on Kremenchuk struck a very busy area which had no link to the hostilities,” the city’s mayor Vitali Maletsky wrote on Facebook.

Lunin denounced the attack as a “war crime” and a “crime against humanity”, saying it was a “cynical act of terror against the civilian population”.

“Russia is a disgrace to humanity and it must face consequences,” he wrote on Twitter.

The US ambassador to Ukraine Bridget Brink said the world would “hold the Kremlin accountable for its atrocities in Ukraine”.