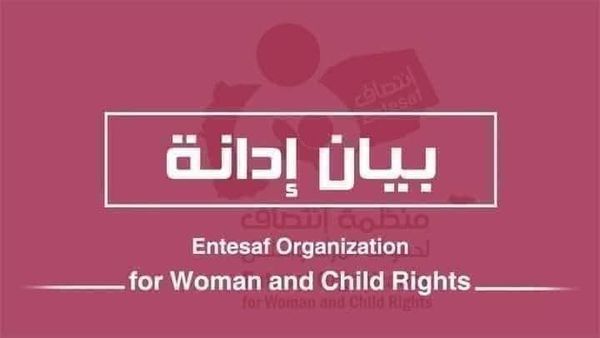 Enstef Organization for Women and Child Rights Regarding Violations of the Truce by the Countries of the Aggression Coalition, not allowing the oil Derivatives to Entering , and Opening Sana’a International Airport

Entesaf Organization for Women and Children’s Rights condemns the continued violations of the aggression coalition’s commitments agreed in the armistice, which provides for allowing entry of oil derivatives and opening Sana’a International Airport.

The coalition of aggression is preventing oil derivatives ships from reaching the port of Hodeidah and detaining them at sea despite obtaining the necessary permits from the United Nations and preventing the opening of the airport and the arrival of civilian flights to and from Sana’a International Airport, as it negatively affected life in all service and vital fields and increased The deteriorating situation of the health sector, which led to the suspension of most of its services as a result of the lack of oil derivatives, and the lives of tens of thousands of patients at risk and threatened with death, especially patients with kidney failure, cancer, heart, intensive care and other critical diseases, who are still waiting for the opening of Sana’a International Airport.

Enesef Organization for Women and Children’s Rights works in the field of advocacy and support for women’s and children’s issues and their rights; It is well aware of the nature of the catastrophic conditions experienced by civilians in Yemen over a period of (8) years, where the aggression against Yemen and the suffocating siege caused the deaths of hundreds of thousands of innocent people, and the displacement of millions who were forced to leave their homes and now live in extremely difficult and complex conditions and lack the most basic elements Most of them are women and children.

The Organization affirms its rejection, which stems from its realization that the continuation of this escalation will have catastrophic risks to the humanitarian situation in Yemen, and will multiply the suffering of the civilian population in Yemen, most of whom are below the poverty line and exposed to extermination.

It also renews the appeal of the international community, human rights and humanitarian organizations, and all honorable and free people of the world to assume their moral and humanitarian responsiubilities in supporting the oppressed Yemeni people, condemning the horrific crimes committed by the Saudi coalition and putting pressure on the United Nations, specifically the Security Council, to carry out their legal, humanitarian and moral duty to support human values ​​and noble principles and to stop War and all forms of aggression, lifting the siege, releasing oil derivatives ships detained by the aggression, and opening Sanaa airport.